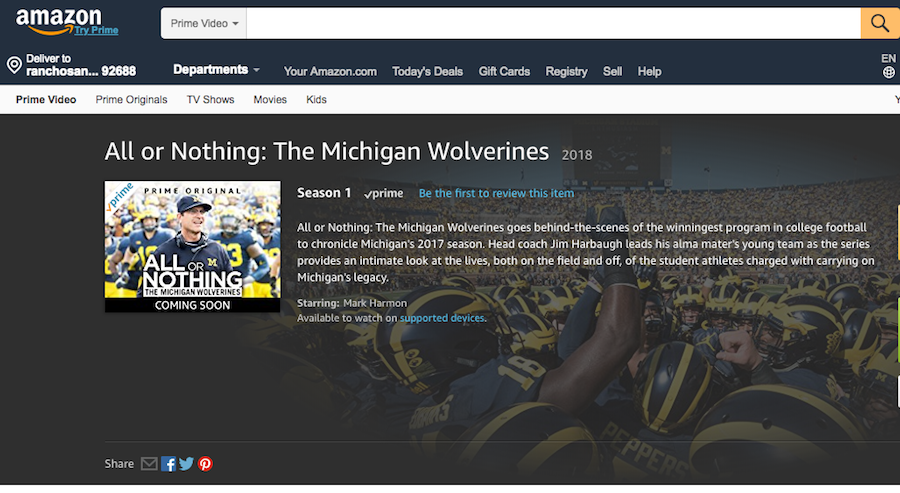 Following the success of the Emmy-winning “All or Nothing” NFL series, Prime Video is launching additional sports programming on the service underneath the “All or Nothing” umbrella, according to Amazon.

The upcoming series will offer “unprecedented access to a team’s entire season, character-driven storytelling and compelling visuals,” according to Amazon.

All or Nothing: The Michigan Wolverines, narrated by award-winning actor/producer Mark Harmon (“NCIS”), premieres on April 6, exclusively on Prime Video. All eight episodes will be available on that date. The series allows Prime members into the never-before-seen inner workings of the winningest program in college football, chronicling Michigan’s 2017 season. The cameras follow Coach Jim Harbaugh in his third season leading his alma mater’s storied program through triumphs, trials and tribulations as they play in the Big Ten, one of the toughest college football conferences in the nation. The series also provides an intimate look at the lives, both on and off the field, of the student athletes charged with carrying on Michigan’s legacy.

All or Nothing: New Zealand All Blacks follows New Zealand Rugby’s famed All Blacks throughout 2017. The series provides a look inside the world of the players, coaches and the support team that sits behind them through the season, on and off the field. Prime members will get to see what makes them so successful and what it means in this rugged sport to undertake the responsibility of donning the black jersey and performing the sacred Haka.

All or Nothing: Manchester City shows fans the historic Club’s behind-the-scenes action, its legendary coach, Pep Guardiola, and the personal stories of the players who are currently at the top of the English Premier League table. Guardiola was one of the best players and coaches of his generation, having won three Champions League titles during his time at FC Barcelona. He joined Manchester City in 2016, coaching stars such as Sergio Aguero, Gabriel Jesus and Kevin de Bruyne.

“Prime Video prides itself on offering incredibly compelling sports content with unprecedented access,” said Heather Schuster, head of unscripted, Amazon Originals. “We are able to put cameras in places where none have gone before to give Prime members an inside look at some of the most storied sports programs in the world. It only made sense to bring these series under the ‘All or Nothing’ banner to reinforce our commitment to strong storytelling in this genre.”

The NFL installment of ‘All or Nothing,’ produced by NFL Films, returns for its third season April 27, featuring the 2017 Dallas Cowboys.

Prime members will be able to stream all series exclusively via the Prime Video app for TVs, connected devices including Fire TV, mobile devices and online at http://www.amazon.com/originals. Members can also download the series to mobile devices for offline viewing at no additional cost to their membership.

The series will be global releases and available on PrimeVideo.com for Prime Video members in more than 200 countries and territories.