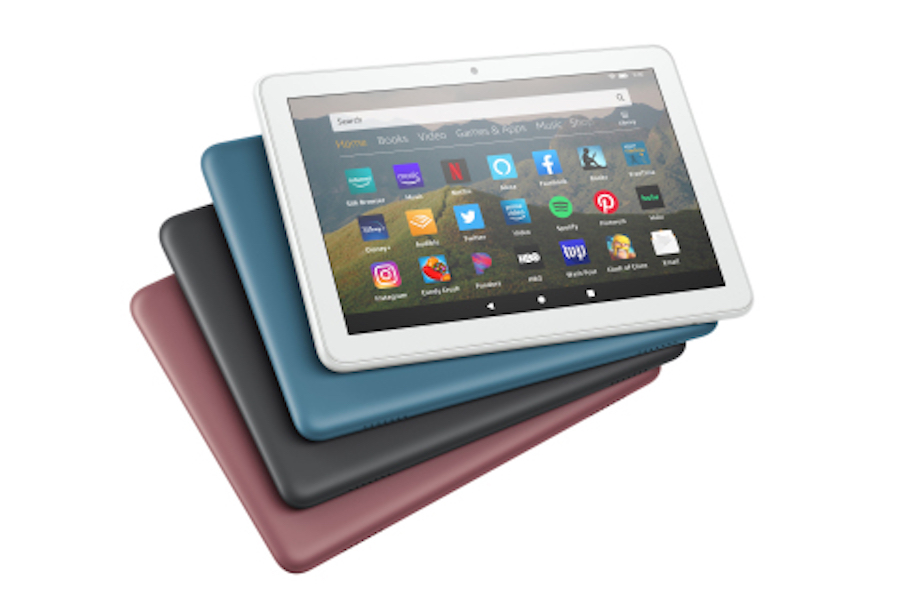 Amazon May 13 announced the next generation of its Fire HD 8 tablet lineup with the all-new Fire HD 8, Fire HD 8 Plus and Fire HD 8 Kids Edition.

The Fire HD 8 is available for preorder, starting at $89.99 at www.amazon.com/firehd8. For a limited time, it is available in a two-pack bundle for $159.99. Fire HD 8 is offered in White, Black, Twilight Blue, and Plum, and will begin shipping on June 3.

The tablet has 32GB of internal storage and up to 12 hours of battery life. For $20 more, the Fire HD 8 Plus has 50% more RAM, wireless charging, and six months of Kindle Unlimited included.

The Fire HD 8 features an eight-inch, 1280 x 800 HD display with more than one million pixels; a faster 2.0 GHz quad-core processor and 2GB RAM. Tablet includes options for 32GB or 64GB of internal storage, support for up to 1TB of expandable storage via microSD, and free unlimited cloud storage for all Amazon content and photos taken with Fire tablets.

As a special introductory offer, Fire HD 8 Plus buyers will get six months of Kindle Unlimited included with their tablet purchase. After six months, the Kindle Unlimited membership renews at the regular price of just $9.99 per month.

The Fire HD 8 Plus comes in a new Slate color, and can be pre-ordered today starting at $109.99 at www.amazon.com/firehd8plus. It begins shipping June 3. The Fire HD 8 Plus can also be purchased as a bundle with the all-new Made for Amazon Wireless Charging Dock by ANGREAT for $139.99.

Accessory Cases are available for both Fire HD 8 and Fire HD 8 Plus tablets in Twilight Blue, Charcoal Black, Sandstone White and Plum for $29.99.

The new Fire HD 8 Kids Edition includes the aforementioned features and comes bundled with a kid-proof case, an adjustable stand in blue, pink, or purple, a two-year guarantee, and a year of Amazon FreeTime Unlimited for $139.99.

FreeTime includes more than 1,500 educational titles organized by core curriculum and extracurricular topics, such as math, science, exercise, art, and virtual fieldtrips. In addition, families will also have access to additional premium content from Homer and PBS Kids within FreeTime Unlimited. All of the FreeTime Unlimited content is kid-friendly and hand-selected by the Amazon FreeTime team with new titles added regularly.

“Over 20 million kids (and their parents) have enjoyed the award-winning Amazon FreeTime service,” Kurt Beidler, director of kids and family at Amazon, said in a statement.

Parents can use parental controls to choose what content kids can access and to add more content. These settings can be managed on the device or parents can visit the Parent Dashboard at parents.amazon.com to view daily activity reports and easily adjust their child’s FreeTime settings from any web browser, whether they’re on a mobile device or computer.