Original content is getting pushed toward SVOD. That’s according to Ampere Analysis, which says the five largest U.S. content distributors have increased the proportion of their original shows premiering online. 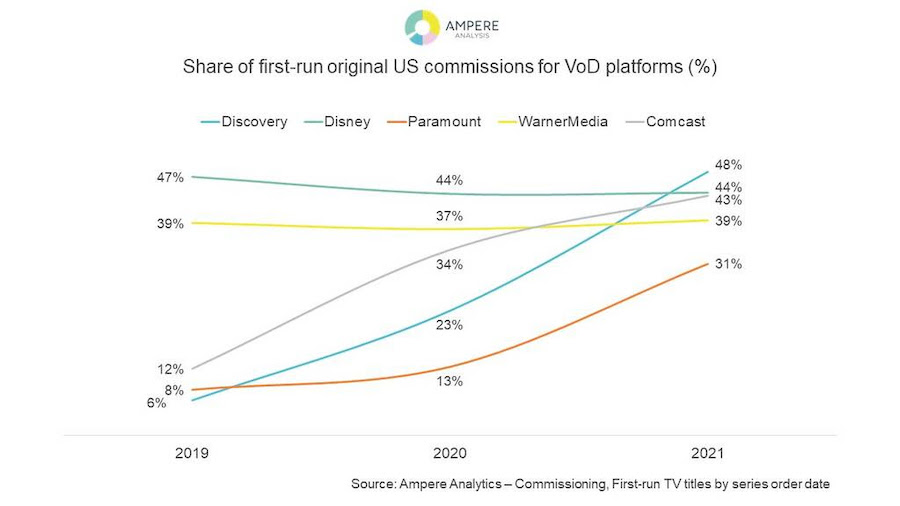 Disney and WarnerMedia led the way with a strategic shift several years ago, while Comcast and Discovery were later to the game, catching up in 2021, according to Ampere.

Discovery, in particular, has rapidly switched strategy, moving from having a minimal focus on VOD originals in 2019 to placing the greatest emphasis on streaming originals. In 2021, nearly half (48%) of its first-run commissions were for VOD platforms, primarily Discovery+.

Having entered the SVOD market early with CBS All Access, Paramount now lags its studio rivals with only one third of commissions going to VOD. Time and resources over the last two years has largely been spent readjusting content priorities among its cable assets post the 2019 Viacom-CBS merger, according to Ampere. 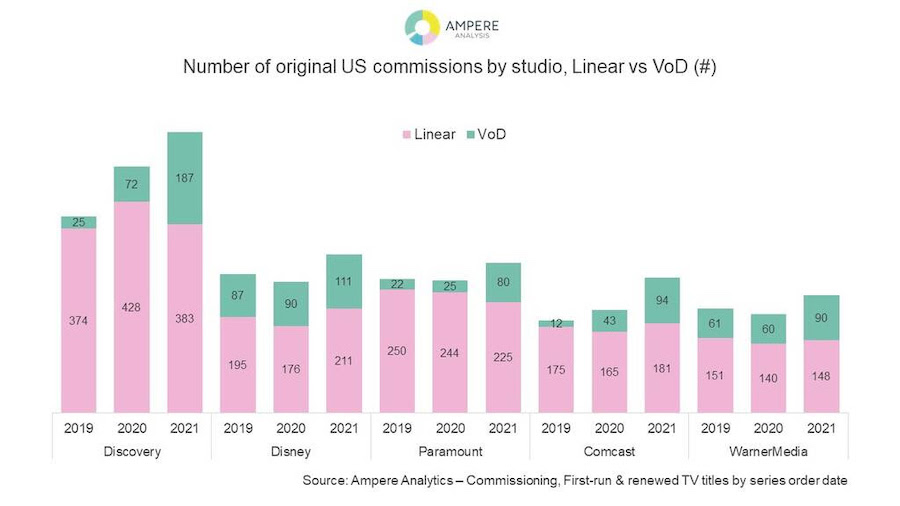 “Original content is crucial to the success of any SVOD service,” Fred Black, research manager at Ampere Analysis, said in a statement. “And alongside increasing the volume of streaming originals, the studios are using a strategy centered on adapting existing IP, spin-offs, and reboots in their efforts to migrate loyal cable and movie audiences to the new ecosystem. Franchise character spin-offs have proved enormously successful for Disney+, with titles such as ‘The Mandalorian’ and Marvel series like ‘Loki’ and ‘Wandavision’ boosting the service’s early audience growth.

“The other studios have taken note; spin-offs from Food Network cooking competition ‘Chopped’ and TLC stalwart ’90 Day Fiancé’ are increasingly housed on Discovery+, and while Paramount Network’s blockbuster hit ‘Yellowstone’ is currently streaming on Peacock due to a preceding deal, the after-show reaction series and dramatic spin-offs will be found on Paramount+.

“Reboots are another way to capture audiences from elsewhere and head up HBO Max’s slate with series like ‘And Just Like That …’ and ‘Pretty Little Liars.’ Don’t forget the power of kids content in the streaming game too; Peacock is betting heavily on Dreamworks Animation’s library of IP for new animated series.

“All of this poses a problem for incumbents like Netflix and Amazon, which find themselves needing to build out franchises at an accelerated rate to compete, through a combination of buying up existing IP like ‘Lord of the Rings,’ the Roald Dahl books, or ‘The Witcher,’ as well as leveraging existing hits like Amazon’s ‘The Boys’ or Netflix’s ‘Selling Sunset’ to the maximum extent through multiple spin-off series to keep pace.”