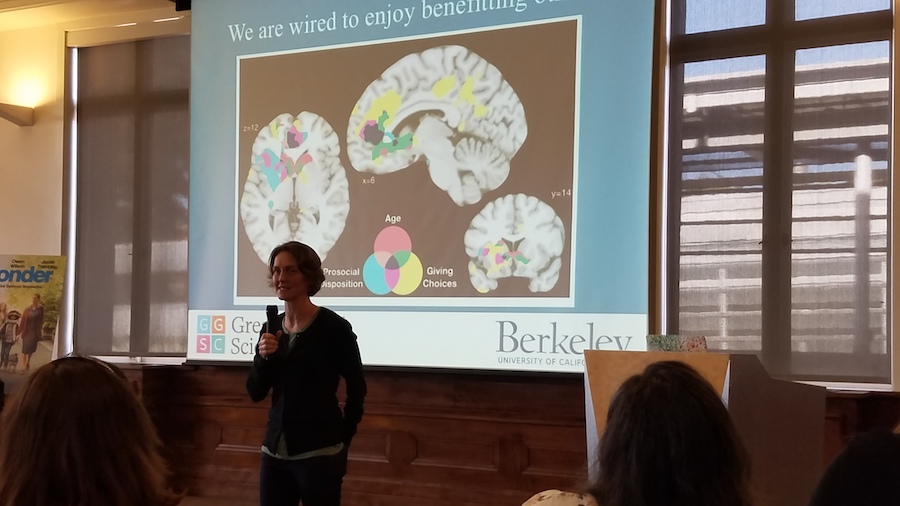 A scientist in analyzing the film <e.<Wonder noted that humans are wired for kindness.

The wonder of Wonder may be its ability to sidestep sentimentality.

A film about a boy with facial deformities entering junior high could be a genuine, gushy weeper.

“I was constantly worried about it being too sentimental because it’s such an emotional story,” said screenwriter/director Stephen Chbosky, noting he learned how to meter sentiment from previous project The Perks of Being a Wallflower.

What does that mean?

“Tough take means where it’s not all sappy,” Chbosky said. “Do it where it’s a little bit where you’re fighting the emotions as much as you can.”

“It’s a really strange phenomenon that the more you pump the music and the more you’re pushing people to cry, the more I find, the less they’re going to,” he said.

A neutral stance is best, he said.

The music had to be subtle as well.

“We mixed the music so much lower than you would normally mix music in a film like this,” he said, adding composer Marcelo Zarvos used piano to elicit a childlike point of view and that he “didn’t pour on the strings.”

The film flew under the radar as well, between superhero blockbusters and the indie scene at the film festivals.

“It’s a lot more than you think it’s going to be,” the director said of the film. “In a larger sense, Wonder represents something that used to be fairly common, live-action films of quality designed for the entire family to unabashedly enjoy together. I mourn it. I miss them. We all know, as lovers of film, that the middle class of movies has certainly thinned out quite a bit, and you have the huge $200 million blockbuster and you also have maybe the small independent film. So what has happened is when you make the big blockbuster, there are certain things that it has to follow, and if you make the smaller film, they tend to go a little darker, a little bleaker, because they think that that’s the way that they’re going to get their audience. And I’m really interested in the middle, personally as a filmmaker. I don’t know why, just because you are making a film about children, why would it have to be of any less quality than a movie based on what some other person might consider to be a hard-hitting issue? They are all issues and they deserve equal time and aspirational art.”

In addition to an enthusiastic audience (the film grossed more than $285 million at the box office worldwide), Wonder’s plaudits include an Oscar nomination for makeup magician Arjen Tuiten, for Best Makeup and Hairstyling.

“It’s the first time in film history, to my knowledge, where a 9-year-old has been in full prosthetics as a lead,” Tuiten said.

And that was no small feat. A child actor’s time on set is limited and every minute in makeup is a minute not on set.

“Normally, on a makeup of this type, when one is completely covered in prosthetics, you’re looking at three and a half hours at least, and because of the hours you can shoot with a minor, you can’t do that, so we got it down to 1 hour and 15 minutes, in the end,” he said.

It was trying for young actor Jacob Trembley, but “overall he was amazing,” Tuiten said.

“I don’t think any other 9-year-old could have done that.”

Also, having the prosthetics allowed the other actors, including veterans Owen Wilson, Mandy Patinkin and Julia Roberts, to react more realistically — rather than imagining computer generated effects.

Tuiten recalled Roberts saying, “It’s just so great to act off of that. If it’s just dots, what are you going to look at?”

Co-star Izabela Vidovic, who plays the lead’s older sister, has been so affected by the film that she has launched a website, www.Passionforcompassion.org, a nonprofit to promote awareness of craniofacial disorders and fund care.

“I think that the projects I’ve done have inspired me to create a voice for people out there who don’t have it,” she said.

In contrast to traditional notions of survival of the fittest and constant conflict, recently social scientists have found kindness in human society is a reward in itself — giving support to the themes in the film — noted Emiliana R. Simon-Thomas, Ph.D., who spoke at the event.

“It brings more joy in some to give than to receive,” she said. “The brain registers kindness more like eating chocolate.”