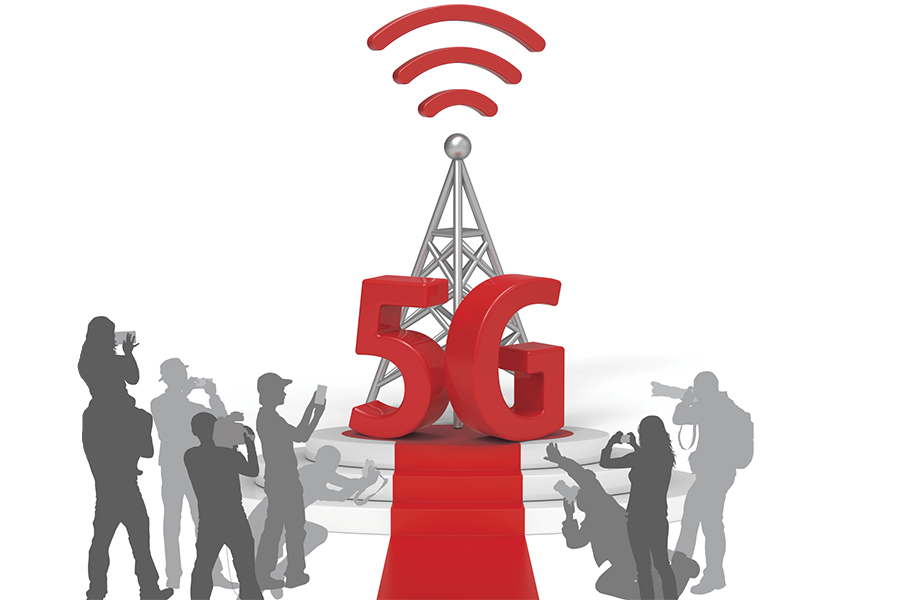 It’s the new star in mobile that everyone is talking about: 5G.

The new technology, the next big advance for wireless customers, could have a significant impact on home entertainment.

Over the next decade, media and entertainment companies will be competing to win a share of a near $3 trillion cumulative wireless revenue opportunity, according to the newly released “5G Economics of Entertainment Report” commissioned by Intel and conducted by Ovum.
The report says that as early as 2025, 57% of global wireless media revenue will be generated by using the super-high-bandwidth capabilities of 5G networks and the devices that run on 5G. The low latency of these networks means that video won’t stall or stop — livestreaming and large downloads will happen in the blink of an eye.

Wireless carrier U.S. Cellular offers an interactive link that enables users to see the benefits of 5G in their daily lives.

“People are watching more and more of their content on their mobile phones, so having instant access to the highest-quality format of a movie, 4K with HDR, having it no matter where you are, this is enabled by 5G,” says Robert Powers, executive director of global technology and business development at the Fox Innovation Lab — the high-tech think tank and lab launched in 2014 to meld technology and entertainment.

“No buffering, no matter what time; whether it’s Tuesday night at 3 a.m. or it’s Friday night at 7 p.m., you’re getting the same quality experience,” Powers says.

This is sweet music to Netflix and other over-the-top video services that increasingly eye mobile access as a requisite to subscriber growth.

Netflix reports about 70% of its content is streamed through a television in the home, not on a smartphone, tablet or laptop. As the SVOD pioneer expands globally, especially in countries such as India heavily dependent on mobile networks, 5G affords greater streaming video access to millions of wireless devices simultaneously.

Indeed, Netflix partnered with T-Mobile in the United States, offering the carrier’s mobile subscribers free access to content for a year. The carrier, which is trying to merge with Sprint, recently announced plans to spend $3.5 billion deploying 5G nationwide.

“I believe 5G will be a game changer,” Jeff Binder, EVP of home and entertainment at T-Mobile, told a tech confab in August.“4G changed the way people used their phones; 5G is going to change the way all of us use our home as well as our phone.”

Even President Donald Trump is touting the benefits of 5G adoption.

Trump issued a memorandum to jumpstart a federal push with the subject line “Developing a Sustainable Spectrum Strategy for America’s Future.” The memo stated, “It is imperative that America be first in fifth-generation (5G) wireless technologies — wireless technologies capable of meeting the high-capacity, low-latency, and high-speed requirements that can unleash innovation broadly across diverse sectors of the economy and the public sector.”

Verizon has bet its future growth on 5G. In announcing an internal restructuring that focuses on technological improvements, CEO Hans Vestberg on Nov. 5 said, “We’re building on our network transformation efforts … to deliver new customer experiences and optimize the growth opportunities we see as leaders in the 5G era.”

With large segments of their subscribers on mobile networks, telecoms and others eye 5G as a conduit toward greater direct-to-consumer efficiencies, including pay-TV.

Dish Network’s pioneering Sling TV could be a 5G beneficiary should the satellite TV operator’s dreams of a proprietary 5G network come to fruition.

“If you want to lead in 5G, I will guarantee you’re going to have to have a standalone network because that’s the only way you’re going to compete with other people in the world,” Dish co-founder and chairman Charlie Ergen said on a Nov. 8 fiscal call.

“We’re at the dawn of something new that will define the next decade and generation of connectivity,” Andre Fuetsch, chief technology officer at AT&T Communications, said in a statement. “Future smart factories and retailers, self-driving cars, untethered virtual and augmented realities, and other yet-to-be-discovered experiences will grow up on tomorrow’s 5G networks.

The new technology is also expected to streamline media production. In a June trial, Fox Sports, in cooperation with the Fox Innovation Lab and Ericsson, Intel and AT&T, used 5G technology to stream 4K video over 5G for broadcast at this year’s 118th U.S. Open Championship.

“We set up a 5G network at one of the holes of the golf tournament, and we wirelessly captured and delivered 4K content for DirecTV consumers,” Powers says. In addition to the achievement for 5G delivery, the experiment opened up new possibilities to save money in production.

“What used to happen is we had to run fiber from the back of the camera all the way across the course,” Powers says. “And if now we can send this content wirelessly, we don’t have to spend money on the labor and fiber to lay that down. This is an example of how a 5G network can bring us cost savings on the production side.”

A New Reality in 5G

“VR today is ultimately limiting in that you have a cord coming out of the back of a headset that hooks to a machine and that limits your mobility, and VR inherently is not necessarily yet a social activity,” Powers says. “With 5G we feel like you can cut the cord off of the back of that VR headset and still be delivered the type of visual quality and latency that makes VR possible. And then beyond that, because of the speed of 5G you’re able to make VR part of a social experience.

I think those two factors are things that will improve the overall VR experience and ultimately make it a more commercial or more mainstream product.”

But augmented reality may be the biggest beneficiary of 5G, Powers says, offering the Pokémon Go experience — the groundbreaking AR experience that allowed mobile users to “capture” characters placed in the real world — on steroids.

“In a given square kilometer, 4G enables roughly 1,000 devices to be connected to the network, and in a 5G world that number jumps to a million; a million connected devices per square kilometer,” Powers says. “What that means for us is the ability to — when all of these objects around us essentially can have sensors and they can be connected — this forms a platform where it’s not just like the Internet of things, which we have right now today in our home, but it essentially becomes like the Internet of everything.”

This hyper-powerful, hyper-connected environment will produce entertainment experiences that have better graphics, that are more social and that, ultimately, offer new narrative structures that can follow consumers anywhere they go.

“We certainly haven’t wrapped our minds around it, and we certainly haven’t produced anything commercial, but one thing we did do this summer is we took our first crack at trying to complete one of these experiences on the Fox lot,” Powers says. “We used the Fox lot as the stand-in for our public space, and we tried to build an AR experience that took you around the Fox lot. As you went through it, you went through a narrative, interacting with AR characters that stood next to the Nakatomi Plaza (the Fox Plaza building made famous in the original Die Hard movie) or characters that were located in our commissary, and as you moved around the lot, you would interact with these characters through a narrative experience.”

What they found is that a traditional narrative didn’t work as well in the AR experience as did a more fluid narrative.

“What we found very quickly is, in those times where we move out of that traditional structure, that’s when the AR storytelling really began to pop for us,” Powers says.

The structure is more “amorphous,” he says.

5G could also allow consumers to engage as a character in a story in AR with friends.

“Imagine you are a horror fan, and you want to do Fox’s newest AR horror experience that is enabled by 5G,” Powers says. “You might gather five of your closest friends, and this experience begins on the corner of Hollywood and Vine. And on the corner of Hollywood and Vine, you have your mobile phone or maybe a tablet or eventually you’ll have very-easy-to-wear smart glasses that can deliver images to you, and the experience starts on that street corner. And as you move through the city, perhaps it next takes you to the Hotel Marmont, but as you move through the city you go through a horror experience that is a narrative story that because of the capabilities of AR blends digital assets with the real-world environments that you are in.”

These experiences are at least three to five years away, according to Powers, who believes entertainment will expand in ways not yet thought of.

“5G will enable the types of new content experiences that will expand the concept of how we think about home entertainment,” he says. “These are experiences that are more personal, they are adaptive and … [they] take you outside of your home.”