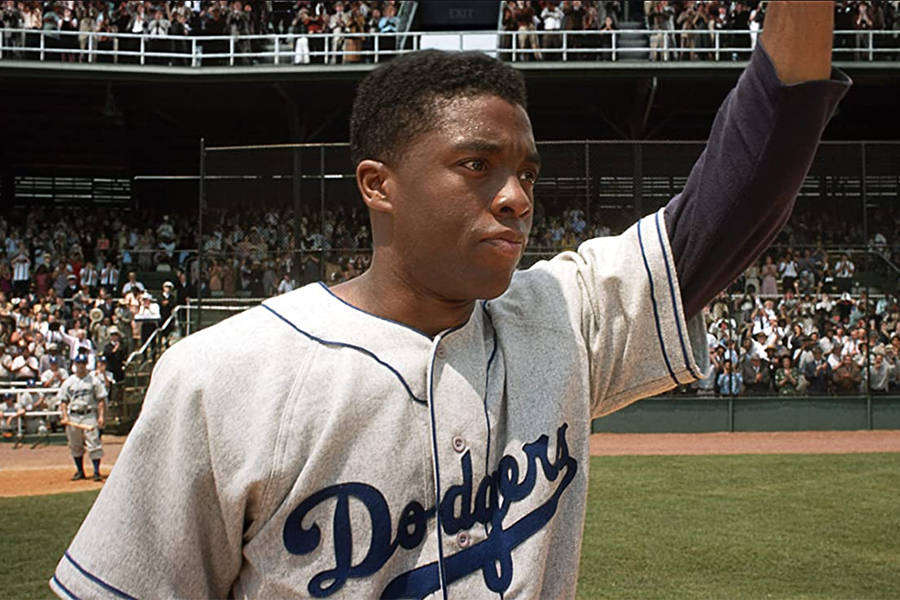 Chadwick Boseman as Jackie Robinson in 42

A second movie starring Chadwick Boseman, Warner’s 42, debuted in the top 10 on the weekly “Watched at Home” chart for the week ended Sept. 5, joining the Disney-distributed Black Panther, which joined the chart the prior week.

Chadwick died of cancer at the age of 43 on Aug. 28. In 42, he portrays baseball great Jackie Robinson; in Black Panther, he plays a Marvel superhero. Coincidentally, Major League Baseball Aug. 28 celebrated Jackie Robinson day, with all players wearing No. 42, which no doubt added exposure to that particular Boseman film.

The weekly Watched at Home chart, which tracks transactional video activity (both digital and on DVD and Blu-ray Disc) compiled from studio and retailer data through DEG: The Digital Entertainment Group, saw 42 debut at No. 9. Black Panther, which had been No. 9 a week earlier, rose to No. 6.

Robin’s Wish, a Vertical Entertainment documentary about the life and death of late comic actor Robin Williams, bowed at No. 16 on the weekly “Watched at Home” chart.

Two films newly released to DVD and Blu-ray Disc, Lionsgate’s action thriller Rogue, with Megan Fox as a battle-hardened mercenary, and the political satire Irresistible, from Universal Pictures Home Entertainment, also appear on the chart for the first time.

Rogue (No. 12) finds Samantha O’Hara (Fox) leading a team of soldiers-for-hire on a daring mission to rescue hostages from their captors in rural Africa.  They wind up stranded and have to battle not only brutal rebels but also a horde of enraged lions.

Irresistible (No. 19) was written and directed by Jon Stewart and features a cast headed by Steve Carell, Rose Byrne, Chris Cooper, Mackenzie Davis and Topher Grace. Carell portrays a campaign strategist who runs a Democratic mayoral candidate (Cooper) in a small right-wing town. The film, from Focus Features, was rerouted from a May 2020 theatrical release by the coronavirus pandemic and instead debuted in June on premium VOD. It became available through regular digital channels on Aug. 18.

Both Rogue and Irresistable were released on DVD and Blu-ray Disc Sept. 1.

Also new to chart is Warner Bros.’ Beetlejuice (No. 18), spurred by the film’s Sept. 1 release on 4K Ultra HD Blu-ray.

The top five remain unchanged from the prior week. Paramount’s popular TV drama series “Yellowstone,” long a favorite among home viewers, again took the top three spots on the chart, with RLJ Entertainment’s The Tax Collector remaining at No. 4 and Universal’s The King of Staten Island again at No. 5.