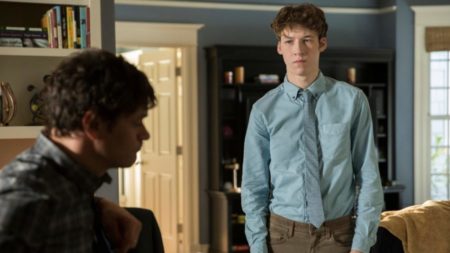 A scene from season two of "13 Reasons Why."

With a 58% spike in demand, Netflix’s “13 Reasons Why” remained in the No. 1 spot on the digital originals chart for the week ended May 26, according to Parrot Analytics Demand Expressions data.

Season two of the teen drama – centered on the aftermath of a teenage girl’s suicide – debuted May 18, making this the first full week in which episodes are available.

The series’ number of Demand Expressions soared to nearly 68 million, more than any other TV show – digital original or regular broadcast – during the week.

In the week leading up to Memorial Day, there were few changes to the digital series demand chart. However, Netflix is releasing more than 80 new titles in June, and Parrot Analytics says it expects demand chart fluctuations in the weeks to come.

The finale of season one, showing a teenage girl taking her own life, prompted schools to issue warnings to parents to monitor their children’s viewing.

For season two, Netflix aired a “cold open” before the first episode featuring cast members read the following disclaimer: “‘13 Reasons Why’ is a fictional series that tackles tough, real-world issues, taking a look at sexual assault, substance abuse, suicide, and more. By shedding a light on these difficult topics, we hope our show can help viewers start a conversation. But if you are struggling with these issues yourself, this series may not be right for you or you may want to watch it with a trusted adult. And if you ever feel you need someone to talk with, reach out to a parent, a friend, a school counselor, or an adult you trust, call a local helpline, or go to 13ReasonsWhy.info. Because the minute you start talking about it, it gets easier.”

Following Martin Kove’s appearance in the season one finale, the “Karate Kid” alum is joining the cast in season two.

“Orange is the New Black” experienced a nearly 32% uptick in demand, as Digital Spy revealed details about the upcoming sixth season of the women prison drama.

Looking at the bottom half of the top 10 digital originals chart, Netflix’s “The Crown” experienced a significant (54%) rise in demand during the week, lifting it to No. 9 from No. 28 the prior week.

The historical drama picked up a supporting actress award at the BAFTA television awards on May 13.

Rounding out the top 10, Netflix’s “Stranger Things” has reappeared in the top 10, at No. 10, after an absence of several weeks.